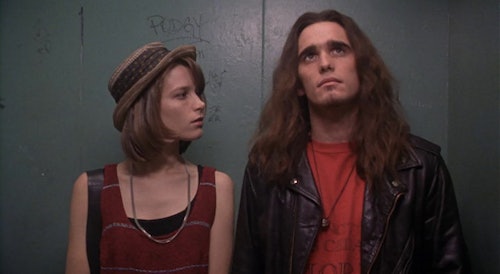 Cameron Crowe’s Seattle-set romantic comedy Singles premiered on September 18, 1992, almost exactly one year after the release of Nevermind and two months before a writer for The New York Times was gulled by a sarcastic Sub Pop intern into publishing a comprehensive “lexicon of grunge speak” combining suspiciously old-timey expressions (“dish;” “kickers”) with dubious new slang (“swinging on the flippety-flop”) — a sort of flannel-clad nadsat in need of a thorough decoding.

The list was, of course, a complete fabrication: a fun, mean-spirited media prank yielding a perfectly absurdist public comeuppance. "When The Newspaper of Record goes searching for the Next Big Thing and the Next Big Thing piddles on its leg, we think that's funny,” snarked essayist Thomas Frank; in bravely attempting to let the proverbial Mr. Joneses of America know what was happening here — “here” being a Seattle not yet fully synonymous with Fraisier or Starbucks, and teeming with potential voices-of-their-generation candidates — The Times and its fact checkers ended up looking like total cob nobblers. But the ambient embarrassment of “Grunge: A Success Story” barely concealed a deeper truth: that the city’s burgeoning alt-rock scene did have its own set of rules and rituals, and its ruling class was, at that very moment, teetering on the verge of self-parody and mainstream co-option. If writer Rick Marin’s description of “greasy Caucasian youths in ripped jeans, untucked flannel and stomping boots” skirted slacker-ethnographic cliche, it also hinted at the eternal paradox of all successfully non-conformist pop-cultural movements: what happens when it’s suddenly square to be hip?

An eternal high schooler with a keener sense of social and class dynamics than John Hughes (and probably a cooler record collection as well), Crowe had been working on the script for Singles since the late ’80s. The success of 1989’s beautifully executed Say Anything — the keynote teen movie of the decade — gave him the juice to get the film distributed by Warner Bros, which released it amidst a flurry of wider-angled trend pieces. In the context of the Times snafu, Crowe’s brief, pointed cameo as a music journalist trawling brainlessly for a quote about “The Seattle sound” plays as a witty, prescient dig against encroaching music-biz carpetbaggers, as well as a reminder that the filmmaker had already planted his flag in this particular soundgarden during his day job for Rolling Stone. But leaving aside its best-selling soundtrack and affably awkward cameos by Eddie Vedder and Chris Cornell, Singles isn’t really a movie about “The Seattle sound,” which mostly just serves as background noise. Revisiting Crowe’s film 30 years later, it’s astonishing how sloppy and banal it seems, not in spite of its ostensibly adversarial, “alternative” posture but as a strange byproduct of it. In theory, Singles’ avowedly hip and subculturally specific depiction of sexy twenty-somethings adrift in a sea of daunting personal and professional dilemmas — from parenting to office politics to breast enlargement surgery — should have exposed the falsity of glossier offerings like When Harry Met Sally or Sleepless in Seattle. But Singles’ reality has no bite: instead, it plays in retrospect exactly like the dress rehearsal for Friends that NBC executives perceived when they considered optioning Crowe’s material as a potential sitcom.

To stick with that Must-See-TV formulation — and also with Crowe’s broad and curiously indecisive depiction of an artistic community he meant to enshrine — the Joey in Singles’ ensemble is surely Matt Dillon’s soul-patched singer-songwriter Cliff Poncier. The character, who fronts the fictional buzz band Citizen Dick, serves consistently as the (firm, sculpted) butt of the script’s jokes about pretty, vacant musician types before an unconvincing last-minute redemption arc turns him into one of Crowe’s typical awkward-nice-guy heroes. (All that’s missing is him wooing his mistreated, skeptical ex Bridget Fonda with a boombox playing Screaming Trees). The problem isn’t that Crowe is making fun of Cliff, or even that the jokes about his arrogance, narcissism and inarticulacy aren’t funny (an early shot of him literally lounging on Jimi Hendrix’s grave is priceless) but that there’s no really persuasive counterpoint to the satire. Insert shots of the film’s other major characters variably rocking out or nodding sagely in crowded clubs don’t exactly suggest an impending tectonic shift; for a filmmaker who’s usually happy-bordering-on-pathological about fusing musical taste with idealism, Crowe never convincingly connects the movie’s music to the progressive aspirations of his city-planning, tree-hugging heroes. Nor does he approach the ecstatic back-stage pass euphoria of his subsequent Almost Famous, with its rose-colored 20/20 hindsight about the glory days of ’70s rock. Singles’ score is by Paul Westerberg, then in the process of repackaging himself as an MTV-friendly solo act after the inglorious dissolution of the Replacements, and unfortunately, it’s just anodyne, interstitial jangle – another dread harbinger of Friends (whose first soundtrack cash-in album featured a pair of Westerberg joints alongside Hootie and the Blowfish, Barenaked Ladies, and the Rembrandts).

The segmented, quasi-experimental structure of Crowe’s screenplay — which begins with a to-camera reminiscence by Kyra Sedgwick’s Linda about a cynically engineered one-night stand before splintering off into a series of other perspectives — was meant to evoke the sequencing on an LP, but the result is more like a DVD on shuffle. Not only are Singles’ episodes wildly uneven (with a subplot about the then eminently mockable phenomenon of video dating services a clear nadir) but the inter-cutting between them is disastrous; it has the curious effect of undermining the things that work in the material, and exacerbating the things that don’t. The central romance between workaholic, commitment-phobic Linda, who doesn’t want to be tied down, and the dryly affectless, deeply neurotic Steve (Campbell Scott), who’s tired of sleeping around, is bizarrely rhythmed, with sub-Annie Hall courtship shtick and melodramatic swerves culminating in a rambling monologue conceptually indebted to Westerberg’s Replacements classic “Answering Machine,” with Scott’s rambling, heartfelt declaration of love (“we had good times and we had bad times, but we had times”) chewed up by a faulty tape. But nothing comes of this mix-up, and no amount of heady, digressive yammering can disguise the mechanical way Crowe moves his characters around — as opposed to, say, Richard Linklater’s Before Sunrise, where the heady, digressive yammering is so natural (and beguiling) that it becomes the texture of the movie.

Where Linklater’s hipster-abroad masterpiece subordinates generational anxiety to a sense of curiosity and adventure about the outside world, Singles (which owes some conceptual debt to Linklater’s wonderful bohemian roundelay Slacker [1991]) revels in a solipsistic insularity: you couldn’t imagine returning to these characters or their prefab quarter-life crises ten years (or even ten minutes) later.

“Somewhere around 25, bizarre becomes immature,” warbles Fonda’s fetchingly fedora’d barista Janet; it’d be a good line if Crowe’s movie had a keener sense of the absurd, or a more convincing grip on maturity. Like so many carefully calibrated movies of the moment, the main utility after the fact is as a superficial, fashionista time capsule rather than any kind of enduring drama, which may also have something to do with the expiry date of its particular strain of Gen-X metaphysics In the final shot, Crowe pans up from Janet and Cliff’s reconciliation and pans across the skyline as voices fill the soundtrack, placing his characters on a continuum of modest, provisional ambitions; less intendedly, the effect is of a generation speaking solipsistically, and endlessly, to itself. Whether the film evokes glory days or good riddance is a matter of perspective; either way, to borrow the (faux) parlance of the ancient times it depicts, to watch it now is to enter a harsh realm.

Adam Nayman is a contributing editor at Cinema Scope and the author of books on Showgirls, the Coen brothers, Paul Thomas Anderson and David Fincher.

Tom Brady Only Cheats at Football

In nonpartisan race for California superintendent of public...

Elliott: Chip Kelly gets out-Chipped by Dan Lanning in...

It's Finally Out: TÁR (MUSIC FROM AND INSPIRED BY THE MOTION...

A decade after her death, this bawdy Latina lesbian rebel...

ACK THIKA MEMORIAL SCHOOL: HYPERGAMY AND ITS ROLE IN BRINGING...

Why do the parents of ACK Thika Memorial Church School trust the school with successive...

According to the second lady, this is part of the Kenya Kwanza government's agenda,...